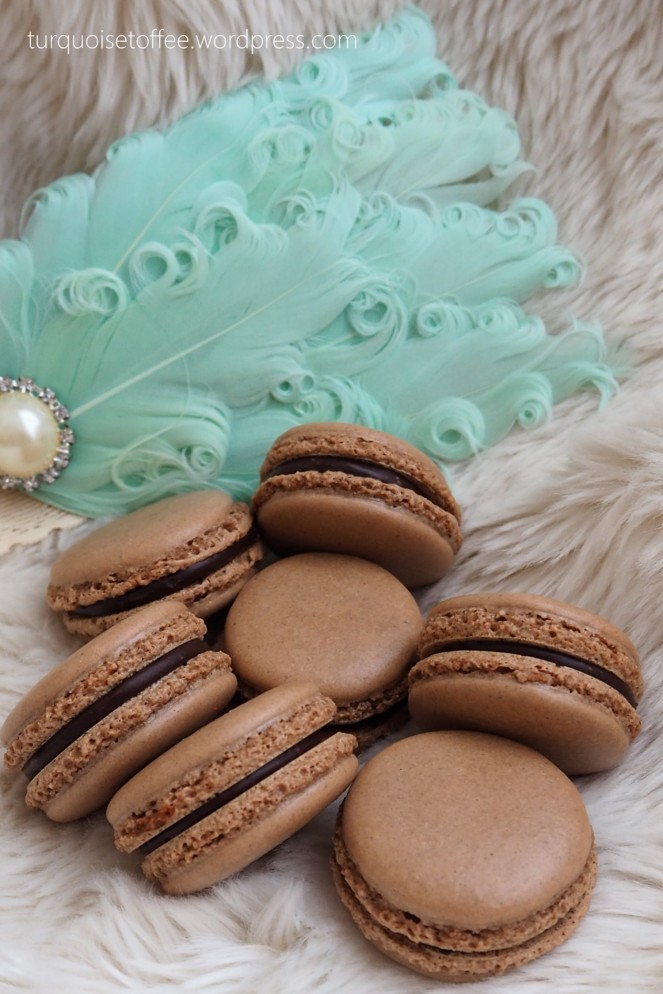 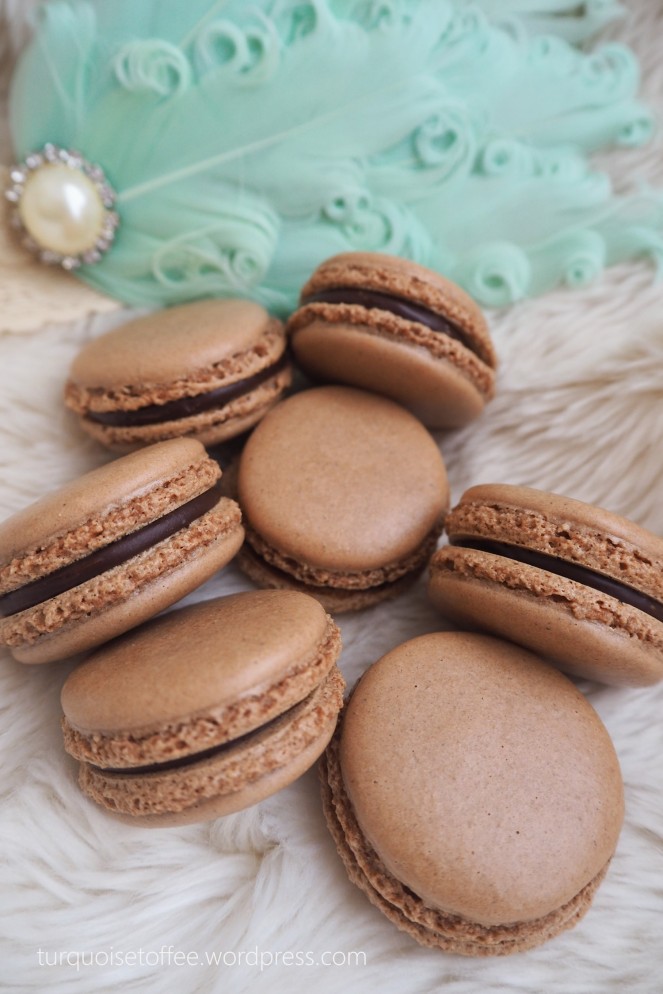 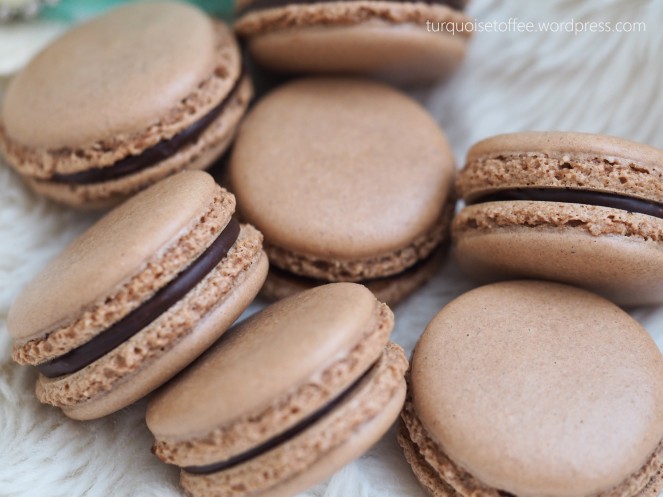 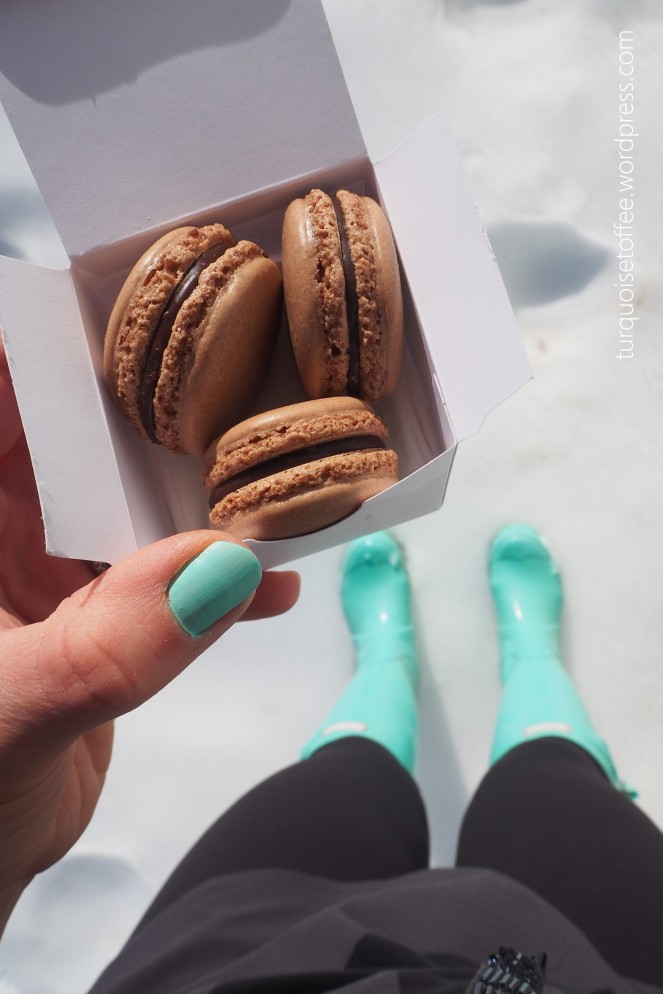 Fool Proof Chocolate Macarons…It’s chocolate macaron time: spring is in the air, the snow is melting, Easter is around the corner.  There’s nothing more perfect for spring than a delicate and delicious macaron cookie, and these chocolate ones are amazingly rich and decadent.

I figured that making a chocolate macaron was as simple as adding cocoa to my tried and true macaron recipe and proceeding as usual.  NOT AT ALL!  I was sorely mistaken!  It took me four tries to get these perfect, I felt like a (mad) scientist tweaking an experiment one variable at a time.

On the first try I added 2 tbsp cocoa and baked at 350 F for 11 minutes.  No good.  They spread really wide, which meant the temperature was too hot.

On the second try I added 2 tbsp cocoa and baked at 325 F for 11 minutes.  Still too hot, they spread and they were hollow on the inside and crunchy.  Plus, they weren’t flat circles on top, you could see where I had piped them onto the cookie sheet so that meant I hadn’t done enough folding with the egg whites.

On the third try I added 2 tbsp cocoa and baked at 315 F for 11 minutes.  They still spread yet they were gooey on the inside which meant they were undercooked.  So that told me that it wasn’t the temperature making my cookies spread at all, it must be the cocoa!  They were still not flat on top so I needed even more folding.

On the fourth and final victorious try, I added just 1 tbsp cocoa and baked at 320 F for 14 minutes.  I doubled the typical folds for a total of 74.  They were PERFECT!  Gorgeous flat tops, lovely feet that hadn’t spread, wonderfully cooked inside without being hollow, gooey or crunchy.  Success!

The nice thing about macarons is that so long as they aren’t burned they will still taste delicious regardless of how they look, especially when filled with chocolate ganache.  My husband’s work crew got a nice bag filled with delicious, though imperfect, chocolate macarons.  Now for the recipe, which is just a modification of my classic Easy French Macarons Recipe:

One: preheat the oven to 320 degrees with the rack in the lower third. Measure your ingredients using a digital kitchen scale. If you don’t have a scale, stop what you’re doing and go get one! They are like $10 at Walmart and are a kitchen staple! The eggs have to be from a chicken in a shell, no egg substitutes or liquid egg whites.

Two: shake the almond flour, confectioners sugar and cocoa in a Magic Bullet for about 1 minute to remove any clumps. Pass this through a fine-mesh sieve. Repeat until your clumps are gone. If you don’t have a Magic Bullet you can use a food processor, but I find shaking the Magic Bullet is the most effective. And if you don’t have either, pass it through the fine-mesh sieve at least three times.  Don’t skip this step, even if you are using store bought almond flour or you will have ugly lumpy cookies.

Four: add the sifted dry ingredients all at once and roll up your sleeves for some heavy labour! You may want to just watch the video on Martha’s site, but here’s the explanation for how you fold the dry ingredients into the wet. Imagine your bowl is a clock. Start your spatula at 12:00, then go all the way around the edge clockwise back to 12:00, then cut straight down the middle to 6:00.  It’s all in the wrist and elbow. That counts as one revolution.  Rotate your bowl and do it a total of 74 times. Seriously, 74 exactly!

Five: line two baking sheets with a Silat or parchment paper and put your batter into a piping bag with a 3/8″ round tip. You may want to do a YouTube search for how to pipe a macaron and practice different styles because everyone seems to do it differently. I do it by making a spiral, going around once on the outside of the circle, then moving in and up going around once in the middle of the circle, then going right to the centre and going around a tiny bit then pulling away to the side. So, three rotations to make a 3/4″ circle that will have a tiny little fallen Hershey’s Kiss peak on the top.

Six: lift the cookie sheet up a few inches off the counter and let it fall, releasing any air bubbles in the cookies. Do that three times. Now leave it for half an hour. No less! The Hershey’s Kiss peak will spread out, they will look dull, and the surface of the cookie will have a “skin” (those are tips I picked up from Anna Olson). If you don’t let them sit for half an hour they will crack when you make them and your batch will be ruined.

Seven: bake one sheet at a time until risen and set, rotating half way through. You don’t want them to brown on the bottom so don’t overcook, and if you start smelling toasted almonds than they are already starting to burn on the bottom.  In my oven it took 14 minutes total, 7 minutes on each side.  When I make more than one batch I find that my oven gets hotter with time so the first batch will take a few minutes longer than subsequent batches.  Do not use a convection oven because it cooks the outside too quickly while the insides are still gooey.

Eight: cool completely. I always need the pan to make more, so after waiting a minute I carefully slide the Silpat onto the counter and let the cookies cool there.

Nine: make the chocolate ganache (and get ready to lick the spoon!).  Put the chocolate chips into a bowl.  Heat the whipping cream in a pot until it is just boiling, then pour it over the chocolate chips and let it stand for 1 minute.  Stir until the chocolate is completely melted.  If you’re not in a rush you can leave this on the counter to harden a little, but I wanted to get my cookies done sooner than later so I put it into the fridge to firm up—but not too much or you won’t be able to pipe it onto the cookies.  About 1 hour works, it should be holding together but not solid.  You’ll want to give it a quick stir or whip before putting it into the piping bag.

Ten: Pipe the ganache into the centre of the cookie–enough that it will be visible right at the edge but not so much that it spills over.  I found that making little tiny circles with the cookies as I sandwiched them together in the ganache helped to get the ganache to spread evenly to the edges.

How many you end up with will depend on how big you make your cookies, but I always get somewhere between 20-30 complete macarons.

Here are links to the other varieties of macarons I’ve tried, please let me know in the comments which is your favourite!

Tiffany Blue/Mint Hunter Boots: no longer available but there are a few on eBay