Babymoons are all the rage right now and we just returned from our second one.  For the first baby, we did a 10 day trip to California.  We started with a few days in LA doing some of the most incredible things, then rented a convertible and took two days to drive up the coast to San Francisco where we spent a few more amazing days.  It was pretty epic.  I was just 13 weeks pregnant at the time, and honestly I really wished that I had looked more pregnant.

We just came back from our babymoon for baby number two.  This was a shorter trip, a weekend getaway to Las Vegas—we arrived on a Friday afternoon and left early Monday morning.  This time I was 19 weeks pregnant and had a little bump—not really visible from the front but definitely there from the side.  We chose Vegas because it’s a short flight, the weather is not terrible this time of year, and there’s no fear of the Zika virus.

This trip was definitely harder to coordinate than the first babymoon and it took two weeks in total.  First we flew south to do my ultrasound and then we flew west to visit my husband’s parents and drop off the baby.  Next we left at 3:45am to Vegas for the weekend and back at 6:00am to pick up the baby.  Then it was a late night flight back to our province followed by an early morning flight back to our little town.  It was EXHAUSTING!  I really believe had we just been able to fly straight to Vegas without all the extras it would have been a much different trip, but that’s how it goes when you need a babysitter for your one year old and live in the middle of nowhere!

Here’s a breakdown of what our Vegas babymoon entailed.  We went with another couple (who got engaged while we were there!), and none of us are big gamblers.  So the majority of the weekend was spent marathon walking, with little breaks to play the games and eat.  By the evening everyone was pretty exhausted, and I had the added disadvantage of no help from caffeine or alcohol to stay awake.

We stayed at the Bellagio.  The first night we walked from the Bellagio all the way to Circus Circus and played carnival games, winning some cute teddy bears to bring home to Baby J.  We walked back on the other side of the street going through all the casinos as we went, and I was lucky enough to find a the perfect pair of fuzzy dice to use for the gender reveal picture!  I carried those dice with me everywhere and posed for countless pictures with them resting on my little bump.  That night the other lady we traveled with and I went to Caesars Palace and saw Celine Dion while the boys gambled.  That was about all I had the energy for and I went to bed right after (lame, I know!).

The second day my husband and I walked from the Bellagio to Mandalay Bay (see what I mean about lots of walking?!).  I was able to get a snack that I had been craving my whole pregnancy: a soft pretzel covered in sugar and cinnamon.  Seriously, that was the best thing I ate the whole trip!  That evening when we came down to the lobby dressed and ready for Cirque de Soleil our friends told us they had gotten engaged, it was so exciting!  We made it to the MGM for Ka, and guess who fell asleep during the show?  Yup, this pregnant lady.  Sigh.  Thankfully I had seen it before and I didn’t sleep through the whole thing, but man-oh-man I’m telling you it was a tiring trip!  I was wearing a really sexy blue and white striped bandage dress from Hot Miami Styles (not a maternity dress) and really felt like a million bucks despite being so tired…at one point a man walking past me said “My GOD!” and that was enough to make me feel good the whole weekend hahah!

The next day we slept in and did the Bellagio’s brunch buffet.  Call me crazy but nothing was as good as that soft pretzel!  After brunch we walked to the fountains with my fuzzy dice to take our gender reveal picture.  It was perfect—we had a great spot right in the middle with no other people nearby…but then the song came on.  It was Elton John’s “Your Song” and it did not go as we had hoped.  The night before, the fountains were playing the American National Anthem and they were spraying water to amazing heights.  Not so much to Elton John, more like when you hold up a garden hose.  Limp.  We got the best picture we could (I think it turned out perfect, actually) and now we have a fun memory of giggling while waiting for those darn fountains to do something exciting as I stood there in my high heels with the dice on my belly with people walking around us staring.  I’m laughing now remembering my husband saying “oh, come on!” at the big finale. 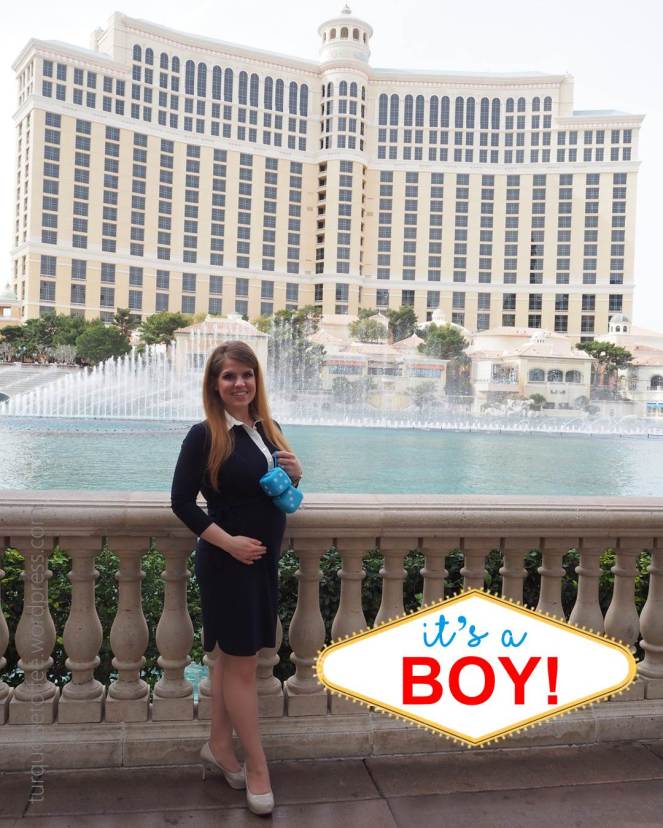 It’s a boy!  I am so excited, and extremely surprised!  I was convinced we were going to follow the Victoria and David Beckham family style by having three girls before getting our boy, but that’s not the case at all.  Our little boy is coming in just a matter of months, it’s truly amazing.  We already have the perfect name picked out (but we’re keeping that a secret until his birthday) and I’ve begun his nursery.  Apparently I’m the only one shocked by this news, everybody else already knew it was a boy haha!  We love him so much and just can’t wait to meet him–it’s seriously not long now, this pregnancy is already half over!

That afternoon we visited the Neon Museum—the Neon Sign Boneyard—which was truly a highlight of the trip for me.  I loved it!  I am a vintage and history buff and it was so cool seeing signs from the early days of Las Vegas.  I always do a lot of research before I travel anywhere (nerd!), and Las Vegas has so much history yet very little of it is preserved; buildings and art and statues are all demolished to make way for the bigger and better.  So this museum is truly a gem.

That evening we went to Fremont Street.  It’s just as odd and crazy as usual!  The craziest thing we saw was a completely naked 80 year old man, wearing just a little sock to cover his member.  There were naked women too, but they were covered in body paint, and were probably in their early twenties.  I found the casinos to be too smoky so we didn’t stay long.  We were back at the Bellagio for the evening, with a short visit to Paris before calling it a night.

We managed to get just a few hours of sleep before we had to leave at 6:00am for our flight.  When we got to the airport we discovered the flight was delayed, so my husband was able to get a massage and I got a pedicure!  It was another highlight of the trip for me!  That experience alone has inspired me to book us a little spa weekend in the mountains later in the pregnancy, it will be a more relaxing babymoon closer to the due date.  The delayed flights resulted in us getting back to Baby J at dinner rather than lunch, and boy did we miss her!

Overall it was an amazingly fun but exhausting babymoon. I would have loved to stay longer –and eat one more soft pretzel–but we had just enough excitement and were ready to get back to Baby J.

So, now that I’ve taken two very different babymoons, here are my tips for planning your own:

one: if this is babymoon for baby number one, make it a big one and save the weekend getaway for subsequent babymoons.  Once you have a baby already, you won’t have the energy or stamina to do a big trip, plus you’ll probably be missing your little one back home.

two: go later in your pregnancy.  I would recommend planning your babymoon for late in the second trimester.  You want to have a bump, otherwise it just feels like a vacation and not a babymoon.  You want to have some glowing pictures with your beautiful belly!  Plus, you will hopefully be more energetic and able to eat more foods later in your pregnancy.  Don’t wait too long or you will be too big and sore and uncomfortable.

three: don’t plan something too busy.  I am the first to admit that our Las Vegas Babymoon was more tiring than it was relaxing.  It was great to get out and see things and do things and dress up, but all that walking was really hard on my body, especially my hips—as soon as I got up from having a break from walking it felt as if my hips were concrete.

four: don’t be afraid to take your first baby on an airplane to get to a babysitter.  Traveling with a baby isn’t impossible but it does bring on some challenges.  I will write a post all about my tips for traveling with a baby, including tricks for flying with ten pounds of dirty cloth diapers (link coming soon).

five: keep it simple.  You don’t need to go across the globe to have a nice babymoon.  In fact, the air travel and all that comes with it can be extremely exhausting.  Even a little road trip or an overnight hotel visit can be the relaxing escape you need before baby comes.  Take lots of pictures (maybe even book a location maternity photo shoot!) and enjoy the little pre-baby escape.

If you are going to take a Las Vegas babymoon, my suggestions are to wear comfortable shoes, take lots of breaks, and don’t walk too much each day (unlike us).  Enjoy the buffets and the shows and try not to stay up too late (yeah, right)!

And PS: Turquoise is not a popular colour in Las Vegas!  My eyes were peeled but I did not see a lot.  Of the hundreds of photos I took, the ones I’ve chosen for this post are the only ones with even a hint of turquoise, often just the glow of the slot machines or my sneakers! 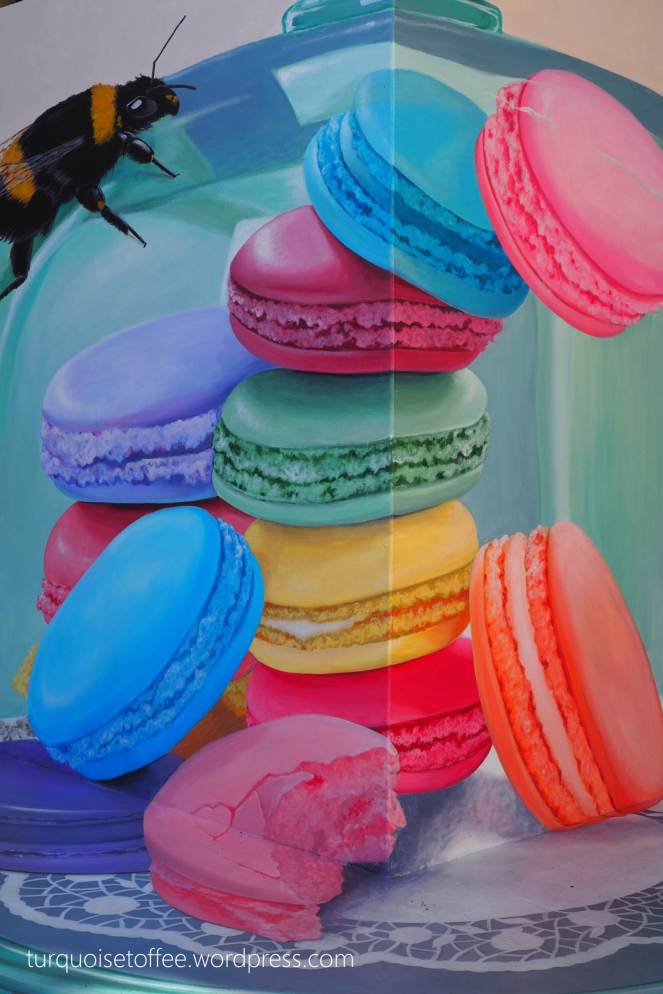 Blue Romper: Forever 21 (I bought this a few years ago so it’s no longer available, but this one in black is kind of similar.)

Blue Striped Bandage Dress: Hot Miami Styles (I also bought this a few years ago so it’s no longer available either, but this one in slate blue and this one in royal blue are kind of similar.)