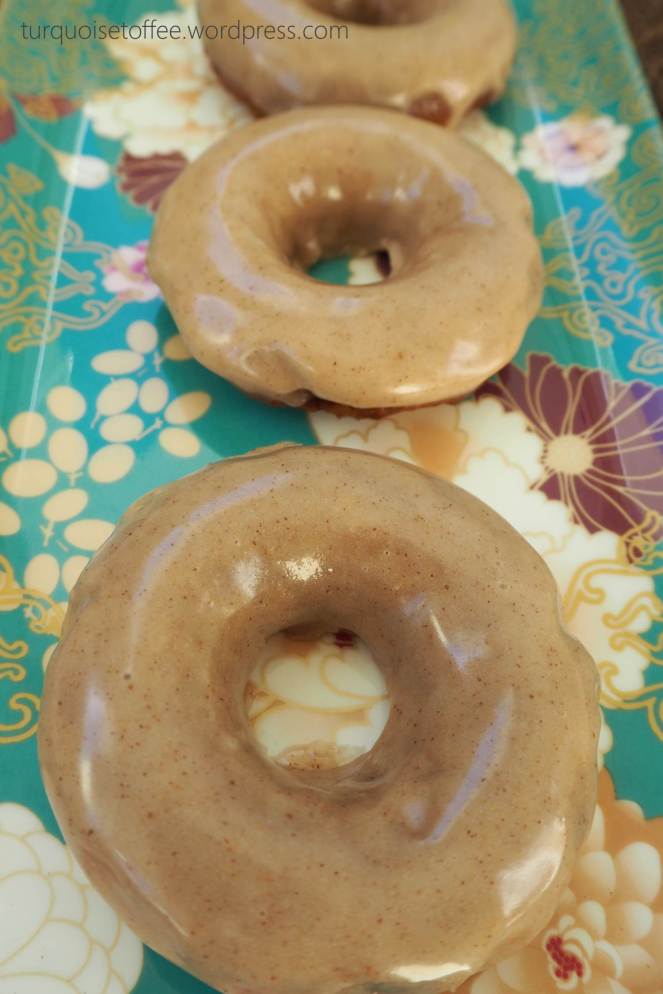 Donuts are arguably the greatest food on Earth. With their crispy exterior, that gooey filling oozing out with each bite, the lickable sticky fingers. But if you’re trying to lose weight or eat healthier, donuts don’t really fit into diet plans or macro counts or nutrition programs. Baked donuts are an OK alternative, but it’s just not the same.

My friends, I have found the solution: Donuts in the ActiFry!  You get just enough of that oily taste and texture without it needing to be deep fried in a vat of oil. No standing over a pot of terrifying hot splashy oil; no lingering greasy restaurant smells in your hair, clothes, and kitchen; no messing up your whole diet for one dessert! OK, OK, still not as amazing as the real deep fried thing, but certainly better tasting than baked, right?

This post is part one of a pumpkin spice series (here is the Fireball Whisky Pumpkin Pie recipe and the Pumpkin Spice Macarons recipe). But you could do any baked donut recipe in the ActiFry, you’ll just need to experiment with your bake/fry times.

Here are the basic steps to getting the perfect healthy deep fried donut in the ActiFry:

One: bake in the oven just long enough to hold the donut shape. For me this was 4 mins at 425 F. Just long enough that they spring back a little when you touch the tops.

Two: flip them onto a flat surface. When you take them out of the donut pan, they will still be soft. You can’t flip them onto a cooling rack or you will get lines and grooves in your donuts. Instead, flip the pan directly onto your counter or a cutting board.

Three: remove the stirring paddle. The donuts are too soft to have them spinning in the ActiFry, they just break and get mangled. But if you distribute the spoon of oil around the bowl of the ActiFry before putting the donuts in they turn out perfectly round. I was able to get six in without them touching each other.  But be sure to also rotate them around when you flip because it is hotter near the back.

Four: flip at least once. I did 4 minutes on one side then flipped and did 4 minutes on the other side. I wanted them just a tiny bit more crunchy so I flipped back to the first side for 1 minute then the other side for 1 more minute. So 5 minutes total on each side in the ActiFry.  You want to make sure each donut has oil under it, but if it’s wet and soggy in an oil puddle you’ll need to cook it longer to crisp up.

Five: don’t glaze ahead of time. If you aren’t going to eat these on the day you make them (um, good luck with that!) I would not glaze because it just soaks into the dough by the next day. I’m not sure how Tim Hortons can glaze their donuts without them becoming soggy–maybe their gaze is less moist or maybe the deep frying creates a moisture barrier…? Comment below if you know!

Now here are the pumpkin spice donut and glaze recipes.  The donut recipe is from Confessions of a Cookbook Queen and I have added in my two cents plus the ActiFry directions.  I created my own glaze recipe which is below (I wanted more pumpkin spice–because there is no such thing as too much pumpkin spice!)

one: preheat the oven to 425 F, grease the donut pan, remove the stirring paddle from the ActiFry and distribute one green spoon of vegetable oil equally around the ActiFry.  Whisk together the Flour Mixture ingredients.

two: heat the Pumpkin Mixture ingredients in a saucepan until it starts to thicken and stick to the bottom of the pan (you’re trying to get rid of some of the moisture, it took me about 10 minutes).

three: pour the Pumpkin Mixture into a mixing bowl.  Whisk in the brown sugar and vegetable oil then temper in the eggs and slowly beat.  Add the Flour Mixture until just combined.

four: pipe into the donut pan until almost full.  Bake until it is just beginning to be set and springs back when touched, 4 minutes in my oven.  You are NOT trying to cook them all the way through, you’re just cooking enough so that they will hold the donut shape when removed from the pan.

five: flip the pan onto a flat surface (not a cooling rack or you’ll get grooves and lines).  Quickly but gently place the donuts into the ActiFry so that they are not touching the edges or each other.  I was able to fit 6 in at a time, but just barely.  Remember, they are not cooked all the way so they are fragile and soft and will get bent and warped if they are squeezed too hard, so be gentle!

six:  cook for 8-10 minutes flipping half way through (go for longer if you want them extra crispy, or flip them again and cook for another minute on each side).  I found that the donuts near the back of the ActiFry got darker than the ones near the front (you can see in my picture the guy on the right is darker than the other two), so you’ll want to rotate them around the circle as well.  Use tongs to remove them onto a wire cooling rack with wax paper underneath (to catch the glaze drips).  Glaze as soon as your fingers can handle holding them.

pumpkin pie spice (as much as you want!  I used about 1 tsp)

vanilla extract (to taste, I used about 1 tsp)

seven: mix all the Glaze ingredients together until it tastes just the way you like it.  If it’s too thick then add more milk and if it’s too runny than add more icing sugar.  In my picture the top row were glazed once and the bottom row were glazed twice but it didn’t really affect the taste, just the colour.

There you have it!  I am excited to try other baked donut recipes in the ActiFry, maybe even a cream or jelly filled version…or chocolate…mmm!  Let me know in the comments how it goes for you!

Maxwell & Williams Kimono Tray in Teal: No longer available at Hudson’s Bay but you can still get other pieces of the collection in teal.

I asked my honey to grab me a box of holiday tea, and he grabbed me ALL the boxes of holiday tea! #spoiledwife #besthusbandever❤️ @carlsj2012
In case you missed it, my recap of the 2021 IFBB Atlantic Coast Pro Bikini, Figure and Women's Physique Competition is on YouTube now, link in bio! I'm all caught up now on my recaps, and boy was this a great one! These women are INCREDIBLE!
My recap of the 2021 IFBB Ben Weider Natural Pro Comp is (finally) up on YouTube, link in bio! I'm almost all caught up with the recaps, there have been so many competitions lately, it's fabulous! This was a particularly great one to see the natural athletes, I am beyond impressed!
For the first time in her entire life, we threw a birthday party for my biggest baby girl with all her friends, it was magical...and CRAZY! She wore my old favourite dress from the early 90s, check out those puffy shoulders!
The final day of the Vintage Beret Hair Challenge from @marlavonduta and @hollandschmeisje . This one is called "Braid Crown" and I'm using my tropical plants to distract you from the meagre size of my braid, is it working?!
My recap of the 2021 IFBB Japan Pro Bikini Competition is up on YouTube now, link in bio! So incredible seeing a Tier 2 show and these amazing athletes!